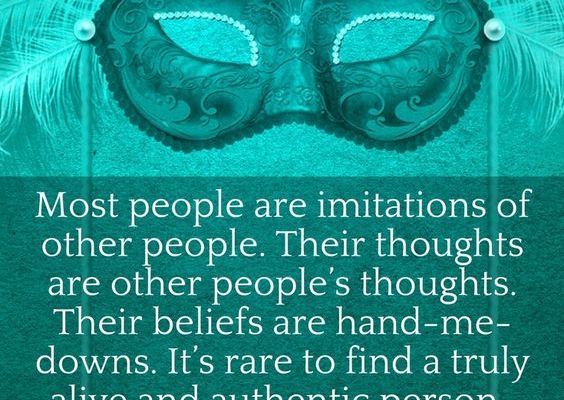 Is being authentic to yourself really a virtue in today’s world?

What does one mean by the words “authentic” and “virtue”? I guess everyone is authentic in the sense they all are doing what they want to do. If I am a power seeking person, I will do what it takes to achieve power. If it means telling lies, I would, if it means boot licking, I would, and if it means paying bribes, I would. What is anything inauthentic about it?

What would being authentic really mean? Isn’t a person authentic when he is not following anyone or any idea? No, I am not talking of any revolutionary. His/her revolt is partial. He revolts against the present system of society and brings about another system. He/she is concerned only with outer changes, while the inner remains constant. A change in system does not bring about a change in the consciousness of man, a consciousness built out of fear, desire, hurt and anger.

Over the millennia man has evolved technologically. But psychologically man has remained the same. Millions of years ago, he was using sticks and stones to war with each other, today he uses nuclear weapons. The technology has changed but the warring mind has remained the same. Till date man has not been able to resolve the issue of hate and anger in him. We fought yesterday and we fight today.

To me an authentic person would be one who devotes his life to the understanding and transforming this whole issue of conflict, which remains unresolved over millions of years of man’s existence. Would it be a virtue in today’s world: judged by the world’s standards, not at all. The world does not want anyone to question it’s structure. All social institutions, governments, global markets, and world cultures are built on following. They all seek submission to their ideas. Questioning them would mean you are thrown out, not only out of organizations but you lose your friends, relatives and peers who subscribe to the values of wealth, power and security. In fact such a person may be charged of not being virtuous, just like Socrates was charged, for corrupting the youth of Athens, by speaking against their Gods.

Virtue is not something defined by society. A society that wars, kills, and has raging inequality in every sphere of life, has no sense of virtue. If it were really virtuous would it bring about such suffering and cruelty. All it’s virtues are confused products of thought. Virtue cannot be defined by thought, because thought always has a duality of good and bad, right and wrong, love and hate. Thought does not know of a love that has no opposite of hate in it. We only know of a love that is possessive and divisive. An authentic person would not be a virtuous person in thought. A virtue which is known and practiced is not virtue. It is something mechanical, twisted and corrupt. A flower does not know it’s own beauty and fragrance. A fire does not know it’s own heat and light. An authentic person would not know his own virtue because it would not be a product of thought and it’s cunning manipulations.

Writer and Teacher of Non-Dual Self Inquiry/Advaita Vedanta

No World is Ever Born. No Cause Exists To Produce It. This is the Final Truth

Brahman is Only Reality, World is an Illusion, Individual is Brahman only